Cholesterol is one of the body’s fats (lipids). Cholesterol and another lipid, triglyceride, are important building blocks in the structure of cells and are also used in making hormones and producing energy.

What is high cholesterol?

Women generally have a higher HDL cholesterol level than men.

A blood sample, taken after a person has fasted for several hours, can be used to measure the levels of all forms of cholesterol.

The levels of total cholesterol fall into the following categories:

As well as this figure, doctors also have to take into account:

Anyone with an established track record of cardiovascular disease such as angina (chest pain), a previous heart attack, coronary angioplasty or coronary bypass surgery should seek advice to keep their total cholesterol level below 4 mmol/l or their LDL below 2 mmol/l.

What can cause high cholesterol levels?

Both hereditary and environmental factors affect the cholesterol level.

We know that diet is a factor, with diets that are high in saturated fat (cakes, pastry, meat, dairy products) raising cholesterol.

High cholesterol is also seen in connection with other diseases such as:

What are the symptoms of high cholesterol in the bloodstream? 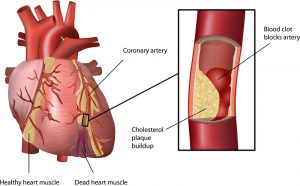 You can’t feel whether you have high cholesterol levels in the same way that you can a headache, but a high level combined with other risk factors can lead to atherosclerosis and symptoms of cardiovascular disease.

Atherosclerosis is the build up of cholesterol and fat (fatty deposits or plaques) in the artery walls. The arteries become narrow and hardened, their elasticity disappears and it becomes difficult for blood to flow through.

These fatty plaques can rupture, causing blood to clot around the rupture. If blood can’t then flow to a part of the body, the tissue dies.

The following are all symptoms of cardiovascular disease. They depend on the degree of narrowing, the likelihood that the plaque is going to rupture (vulnerability), and the organ supplied by the affected arteries.

What can be done to prevent cardiovascular disease?

High cholesterol is only one of many risk factors that lead to hardening of the arteries. Other major risk factors are listed below.

How does the doctor make the diagnosis?

After a 12-hour fast in which only water is consumed, a blood sample is taken to determine the level of:

Cholesterol count also rises during pregnancy and drops significantly for at least three months after a heart attack.

How is high cholesterol treated?

Statins (eg simvastatin, atorvastatin, rosuvastatin) are the most effective medicines for lowering cholesterol. These reduce the production of ‘bad’ LDL cholesterol by the liver, which decreases LDL cholesterol blood levels by up to 50 per cent.

They are extremely effective drugs, and generally very safe, with a very low chance of side-effects.

Although statins are normally very effective, non-statin treatments such as Eezetimibe are available if there are any problems with side-effects such as muscle pains.

These can also be used in conjunction with statins if cholesterol levels remain high, or if a high level of statin causes side-effects.

Older treatments also exist such as fibrates which can be very effective.